skip to main | skip to sidebar

Where Slumdog Millionair fails to give correct answer 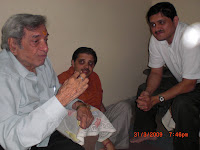 JAIPUR. Who wrote the bhajan (song) ‘Darshan Do Ghanshyam Naath Mori Ankhiyan Pyasi Re’ ? asks the quizmaster in Oscar award winning film ‘Slumdog Millionair’. The quizmaster, played by bollywood actor Anil Kapoor, gave three options to protagonist, Jamaal, - Tulsidas, Meera Bai and Surdas. The protagonist picks out Surdas and the quizmaster proclaims the answer as correct one. But on this count the film by Danny Boyle fails miserably. The famous bhajan was not written by the saint Surdas 1500 years back but by fiery poet Gopal Singh Nepali for film ‘Narsi Bhagat’ in 1957.

It is unfortunate that the film failed to give due credit to Nepali, said renowned music director Ravi, who composed Darshan Do song for ‘Narsi Bhagat’. The poet had brought a lengthy poem written with small letters spread on to two sheets of paper out of which I I selected three stanzas for the film song, recalls Ravi, who gave immortal songs like ‘Babul Ki Duayen Leti Jaa, Jaa Tujko Sukhi Sansar Mile’, ‘Aaaj Mere Yaar Ki Shaadi Hai’, ‘Ai Meri Zohra Zabi, Tujhe Maloom Nahi’ and ‘Kisi Patthar Ki Moorat Se’. The bhajan song was great and it still fondly hummed by Hindustani Film Music (HMF) lovers.

The incident also showed how ungrateful we are toward those who made the golden era of HMF shine, commented Ravi talking with film music lovers. He was in the pink city on a personal visit.

It is saddening to see the quality of today’s film music. Today’s film music completely lacks soul. The songs have life of no more than a month or so. Where ever I go in India or abroad people still hum and like to hear songs of bygone era, he said.

To a question why is it so Ravi replied: where are the writers like Sahir Ludhiyanvi or Shakeel Badayuni who penned words which went straight to the heart. I never gave tune to lyricist and always tuned the lyrics written first.

A big hindustani film music lover Mander Bichoo, a child specialist from Mumbai working in Sarjah for the last 15 years,who runs two most clicked websites on film music was also present at the meet with Ravi organised by one of the big collectors of hindi film music Arun Agrawal. An IT expert Pavan Jha, who runs most favourite website on Gulzar and a film and film-music historian M.D.Soni too shared their insights into film music.

The Suryatra group decided to create a website dedicated to Ravi for which the legendry music director who is equally revered in south for his music in Malyalam films gave his blessings.