Showing posts from September, 2009
Show all

The man to whom Rajasthan owes its food security 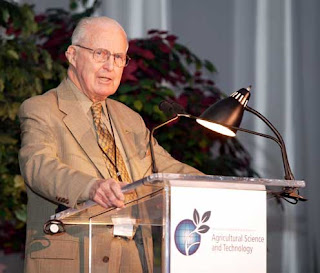 Rajendra Bora Jaipur. Rajasthan too ows its gratitude to agricultural scientist Norman Borlaug who died at Dallas in Texas, United States Saturday last at the age of 95. The genetic plant breeder worked in Rajasthan in 1960s on ‘Intensive Agriculture Development Project’ bringing green revolution in the desert state by growing high yielding wheat varieties that more than tripled the harvest. Rajasthan was selected as the one of the seven projects in the country where the new varieties of wheat, developed by Borlaug in Mexico, were to be planted for advanced generations in 1963 under his personal monitoring after the scientist was invited to India by the Ministry of Agriculture on a suggestion of noted Indian agricultural scientist M.S.Swaminathan. Pali district was selected for the Rajasthan Project because better irrigation facilities were available there from Jawai Dam and Takhat Sagar Dam, recalls Rajveer Singh, retired Additional Director Agriculture. The Pali areas of Bali,
2 comments
Read more
More posts