skip to main | skip to sidebar

State Academies need revitalization for promotion of arts and culture

Now is the time for the state government to start homework for revitalizing various Academies. Although the Academies, like Lalit Kala Academy, Sangeet Natak Academy, Sahitya Academy and others, are autonomous institutions, they derive sustenance and effectiveness from the support of the government. Therefore, much depend on how those in power perceive these institutions. The rich heritage of Rajasthan in all forms of arts –both performing and non-performing- need state supported autonomous institutions not only for preservation but for grooming of local talents and promotion of arts.

One of the failings of these academies has been that they have not only lacked desired financial support of the government but also lacked public support in their working. We have seen in the past that their headships had been distributed like charity. Unworthy heads of such institutions cannot bring any revolution. If we look at the past five years’ scenario in the state and the way affairs of the academies were conducted we have no hesitation in saying that these years were lost years.

The new government will now be appointing chairmen for the academies. It is obvious that those nominated would be from those very near to corridors of power. There would be political desires too for selecting certain candidates. No problem in that because many of those having political leanings could also prove to be harbinger of required change for bringing the academies out of their present rut. The main challenge before Chief Minister Ashok Gehlot, would be to find out right person for right job. He need not depend on others for the selections as he is well verse with the ground realities.

Since the first six months of the new government has already gone in election mode now is the time that it acted decisively and immediately to revamp academies by bringing in people of merit. These are the institution for which no other criteria could be adopted.

It is important that chairman of academies should not only be the persons of artistic or literary eminence and knowledgeable but also hold good administrative acumen and have their heart in the job. We require eminent people as heads of these institutions who could stoutly take up the cause of arts and artists and those who could garner public support in the working of the academies.

Academies can’t be run like government departments. If the government moves ahead with this in mind and find suitable persons to head the academies there would be no dearth of any support from the society.

The art, cultural and literary circles in the state are awaiting the government action. The soon it comes the better.

(The piece appeared in Jaipur Live of The Hindsutan Times on May 25th, 2009)
Posted by Rajendra at 2:00 AM No comments:

The counseling process for Bed courses was completed as late as in February this year. However, The National Council of Teachers Education (NCTE), a statutory body formed by an act of Parliament, mandates that annual examinations could be held only after completion of 180 days of teaching. Therefore, to regularize the 2009-10 session it is prudent to hold classes dispensing with summer vacations, official sources say.

All the concerned authorities have been instructed that in the collages where admissions were delayed and their academic calendar schedule of completing the course by June was not possible regular classes should be conducted in the period of summer vacations to regularize the academic year.

However, praising the government decision to follow NCTE’s norms in regularizing the academic year by dispensing with summer vacations in Bed collages, the experts hope that the State Government would act in a similar spirit to follow other norms of the NCTE to make BEd teaching more meaningful.

The experts feel that the government is making a complete mockery by keeping the Bed collages, affiliated to Universities, under administrative control of Secondary Education and paying the Bed teachers pay scales of school teachers.

They point out that large number of Bed colleges in purely private sector and also those running on self financing basis were not following NCTE norms in Rajasthan like paying University Grants Commission (UGC) pay scales to the teachers teaching Bed courses.

Similarly the NCTE norm that the teachers in BEd collages should be appointed on “full time and regular basis” was being indiscriminately flouted in the state. It is the same case with the facilities of Provident Fund (PF) and Gratuity to the teachers working in Bed collages as the mushrooming private institutions were not paying any heed to the norms.

Even in government colleges some of the NCTE norms were not followed to the detriment of Bed teaching, they assert.

The education is in concurrent list of the Constitution and Centre could too make law even as it was a state subject. The Parliament has enacted the law to provide for NCTE. Therefore, the norms of NCTE would have to be followed by the State Government. In absence of that the degrees being given to BEd and MEd pass outs are virtually invalid.

(The story appeared in Jaipur Live of The Hindustan Times on May 24th, 2009)
Posted by Rajendra at 1:56 AM No comments:

Why Jaipur has surplus staff of teachers when posts lie vacant in countryside ?


Jaipur. Everybody knows in the administration what ails government schools but none of those responsible for proving quality education is willing to correct things.

The government schools, particularly in countryside and rural areas, have to go with vacant posts of teachers in spite of the fact that there is no shortage of teachers. Then why this situation persists? To find the answer one does not have to conduct any research. Government’s own official figures tell the story.

The official figures reveal that while 153 posts of teachers are lying vacant in schools in different parts of the Jaipur district, the capital city alone have 163 surplus teachers. If the surplus staff in Jaipur city is redeployed in the district no post of teacher remains vacant. If this is done the district would have ten teachers more than the sanctioned posts.

Official figures show that one of the schools in the capital has 21 teachers surplus having no teaching job to perform while schools in other parts of the district cry fro staff.

A strong political will can correct the situation. But that would mean disturbing the surplus staff enjoying no-work-full pay. It will be the biggest problem because this surplus staff in Jaipur and other district headquarters have backing of bold and powerful in corridors of power.

The previous BJP government completely failed to correct the situation. Will the new government have guts to act decisively and fulfill its obligation to improve education standard in its own schools is the question experts are asking.

(The story was published in Jaipur Live of The Hindustan Times on May 20th,2009)
Posted by Rajendra at 1:51 AM No comments: 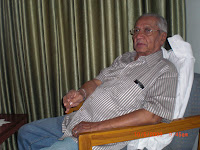 Jaipur. Name of Manahari Singh, who played saxophone and other instruments in more than 15,000 film songs, rings nostalgic bells in the ears of Hindustani Film Music (HMF) buffs. The maestro, around eighty and on dialysis, still plays the wind instrument with gusto transporting the audience to the golden era of film music of the last century.

The old wizard is, however, “angry” over today’s film music scenario. “ Bada Gussa Aata Hai. Every thing has turned into ashes. Film music industry has finished. The ambience and atmosphere created by music directors, lyricist and singers of bygone era have vanished. There is a kind of bestiality pervading the contemporary film music”, commented soft spoken and humble Manahari Da while talking to members of ‘Suryatra’, a local group of cine-music buffs here on Sunday.

The musician, who played for legendary music directors like S.D.Burman, Shankar Jaikishen, Kalyanji Anandji, Madan Mohan, O.P.Nayyar and R.D.Burman, felt that the music being created these days had no match to the golden era of film music. “You can’t create human feelings with electronic key boards”, he said quoting a remark of music director late Anil Biswas that on today’s music you can tap your feet but this can’t move your heart. Therefore, Manohari da said, old film music will never die. It will continue to grip the listeners in generations to come.

When asked to name a song where his wizardry was exploited to the hilt he hummed Laxmikant Pyarelal composed song ‘Main Aaya Hoon Lekar Jaam Haathon Men’ in Dev Anand-Hema Malini starrer ‘Ameer Gareeb’ saying it is the song where my saxophone has been exploited to the extreme.

Manohari Da, who composed music independently and with his colleague Vasu Chatterjee in a few hindi films besides giving music for some of his native Nepali films, felt Shankar-Jaikishen with their huge orchestra were a trend-setter for whom he remembered playing saxophone in a number of songs like ‘Gaa Mere Man Gaa’ in Laajwanti.

Sharing nostalgic memories of the past with ‘Suryatra’ members he said he worked with old stalwarts of Kolkata like Pankaj Mullick, R. C Boral, and Kamal Dasgupta before shifting to Mumbai and also worked with new age composers Jatir and Lalit. I also played with young Anand Palwankar group who play music with key board.

These days I can’t move out much as for three days in a week I have to be on dialysis machine. I have stopped playing for film songs. However, I do perform on stage whenever some enthusiastic people insist and call me.

When senior ‘Suryatra’ members M. D. Soni, a film historian and Arun Agrawal, a passionate collector of cine stuffs, asked him if he ever worked with any music director connected with Rajasthan he fondly remembers Daan Singh for whose super hit song ‘Ye tere Pyar Ka Gam” in ‘My Love’ he played clarinet.


(The piece appeared in Jaipur Live supplement of The Hindustan Times on May11,2009)
Posted by Rajendra at 2:04 AM No comments: