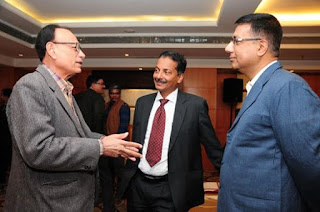 DEVELOPMENT JOURNALISM Rajendra Bora Way back in 1970s we used to passionately talk about Development Journalism. Now it seems it was another world in another era. We also used to assert that Journalism is an attitude, either you have it or you don’t have it. Those who do not have this attitude – a sense of responsibility towards social good-have no business to be in this profession.  With Mr. Sunny Sabestian, Former VC of HJ University of Journalism and Mr. Mohammad Iqbal of The Hindu We felt that a journalist doing development journalism was doing his job to help the people by doing more than filling space in the paper. But the new trends in media in the liberalized economy when market forces have started not only asserting themselves but guiding the democratic process by creating a new culture of “profit” which seems attractive and glamorous to many  are forcing us to think as to what is the media establishments are up to. In this scenario we want to reesta
Post a Comment
Read more
More posts